“We recognize that such powerful technology raises equally powerful questions about its use. How AI is developed and used will have a significant impact on society for many years to come. As a leader in AI, we feel a deep responsibility to get this right. So today, we’re announcing seven principles to guide our work going forward. These are not theoretical concepts; they are concrete standards that will actively govern our research and product development and will impact our business decisions.”

3 Be built and tested for safety

4 Be accountable to people

7 Be made available for uses that accord with these principles

AI Applications we will not pursue

What I love about this manifesto is that it address both sides of the equation. Part One offers some objectives – this is where we would like to go. And Part Two offers ‘applications we will not pursue’ which tells where we’re not headed.

You might like to think of this as creating a pair of railway tracks. We want to steer in this direction but not too far here or there.

If you’re in a delicate, hotly debated or fast moving space it might be appropriate to include both ‘toward’ and ‘away’ from guidelines as part of your manifesto. If this fits your situation then Google’s AI Principles is an example worth following.

Google: Ten things we know to be true (an early manifesto from Google)

Creator: Nick Barnes has more than 20 years of experience in the software industry, as a researcher, programmer, software engineer, consultant, and manager. In 1997 he co-founded Ravenbrook Limited, a software consultancy firm, for which he worked until starting the Climate Code Foundation, and for which he continues as a director. In 2008 he founded the Clear Climate Code project, which is now part of the work of the Foundation.

Purpose: In response to and contribution to the Royal Society’s policy study on “Science as a Public Enterprise”. And, to express the belief that “Open Source publication of all science software will be one outcome of the current revolution in scientific methods”.

Software is a cornerstone of science. Without software, twenty-first century science would be impossible. Without better software, science cannot progress.

But the culture and institutions of science have not yet adjusted to this reality. We need to reform them to address this challenge, by adopting these five principles:

Code: All source code written specifically to process data for a published paper must be available to the reviewers and readers of the paper.

Copyright: The copyright ownership and license of any released source code must be clearly stated.

Citation: Researchers who use or adapt science source code in their research must credit the code’s creators in resulting publications.

Credit: Software contributions must be included in systems of scientific assessment, credit, and recognition.

Curation: Source code must remain available, linked to related materials, for the useful lifetime of the publication.

Creator: Dmitri Eroshenko, founder and CEO of Relenta, CRM for people who get things done.

Purpose: Our software design mantras that make Relenta what it is, nothing else and nothing less.

Simple is more, not less

We believe that the term “simple software” is popularly misused. Designing simple apps isn’t easy, and simple doesn’t mean dumbed-down. For us, simplicity is synonymous with more ability. Simple is the software that lets you get more done with less effort.

We believe in not forcing you to work the way we think is right. Instead, we give you the tools and get out of your way. When faced with multiple design decisions, we apply the one that makes fewer assumptions about what is good for you.

We believe that less is more. Our goal is the software that gives you 90 per cent of the functionality that you need with only 10 per cent of the application weight. Why not the familiar 80-20 rule? Because we can do better than that.

We believe that the #1 reason for poor productivity is data fragmentation across multiple apps, accounts and browser windows. Our goal is to organize any and all information required for running your daily life so that nothing is more than one click away.

We believe that at their core, all small work groups share similar challenges. For this reason we are focusing on the similarities among our users and not on what makes them different. We build our software to be universally applicable to work groups in any trade or profession.

Creator: Eric Raymond, is a software programmer, author and open source software advocate. After the publication of his book, The Cathedral and the Bazaar, he became the unofficial spokesman for the open source movement.

Manifesto: The Cathedral and the Bazaar

1. Every good work of software starts by scratching a developer’s personal itch.

3. Plan to throw one away; you will, anyhow.

4. If you have the right attitude, interesting problems will find you.

5. When you lose interest in a program, your last duty to it is to hand it off to a competent successor.

6. Treating your users as co-developers is your least-hassle route to rapid code improvement and effective debugging.

7. Release early. Release often. And listen to your customers.

8. Given a large enough beta-tester and co-developer base, almost every problem will be characterized quickly and the fix obvious to someone.

9. Smart data structures and dumb code works a lot better than the other way around.

12. Often, the most striking and innovative solutions come from realizing that your concept of the problem was wrong.

14. Any tool should be useful in the expected way, but a truly great tool lends itself to uses you never expected.

15. When writing gateway software of any kind, take pains to disturb the data stream as little as possible—and never throw away information unless the recipient forces you to!

16. When your language is nowhere near Turing-complete, syntactic sugar can be your friend.

17. A security system is only as secure as its secret. Beware of pseudo-secrets.

18. To solve an interesting problem, start by finding a problem that is interesting to you.

19. Provided the development coordinator has a communications medium at least as good as the Internet, and knows how to lead without coercion, many heads are inevitably better than one.

The Cathedral and the Bazaar on Wikipedia

Image from the cover of the book.

Creator: Jason Fried and David Heinemeier Hansson are the founders of software company 37signals and authors of the book Rework. This manifesto was originally posted on their website from 1999-2001.

Purpose: It’s a collection of 37 nuggets of online philosophy and design wisdom. It’s a great introduction to the 37signals’ school of thought and a fun, quick read to boot.

Complete manifesto with descriptions on each item

‘Rework’ the book on Amazon

Creator: Prompted by the works of Andy Hunt and Dave Thomas who wrote The Pragmatic Programmer and Pete McBreen who wrote the Software Craftsmanship. 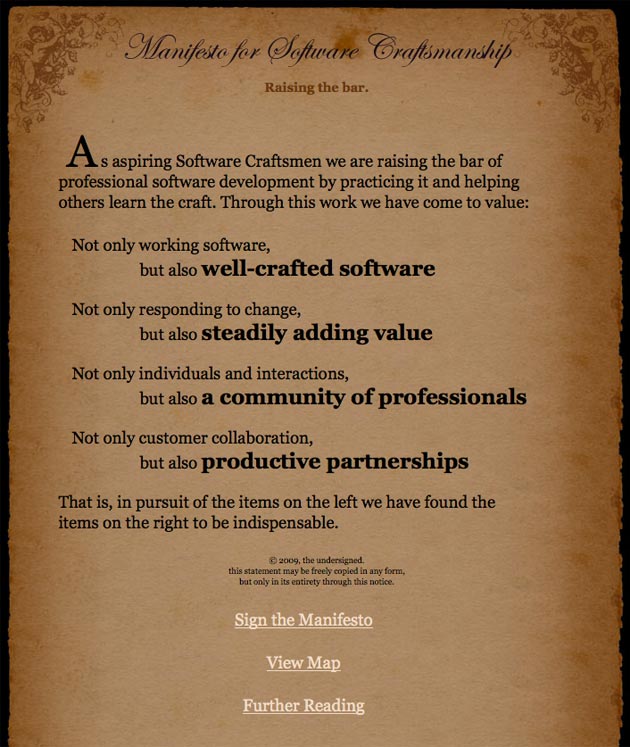 Some useful reading on related topics

Creator: Mozilla is a global, non-profit open-source software building organisation that is best known for creating the web browser Firefox

Purpose: To ensure the Internet is developed in a way that benefits everyone. The principles in this manifesto are seen to be critical for the Internet to continue to benefit the public good.

The goals for the Manifesto are to:

These principles will not come to life on their own. People are needed to make the Internet open and participatory – people acting as individuals, working together in groups, and leading others. The Mozilla Foundation is committed to advancing the principles set out in the Mozilla Manifesto. We invite others to join us and make the Internet an ever better place for everyone.

The Mozilla Foundation pledges to support the Mozilla Manifesto in its activities. Specifically, we will:

Some Foundation activities–currently the creation, delivery and promotion of consumer products–are conducted primarily through the Mozilla Foundation’s wholly owned subsidiary, the Mozilla Corporation.

The Mozilla Foundation invites all others who support the principles of the Mozilla Manifesto to join with us, and to find new ways to make this vision of the Internet a reality.

Creator: In 2001, 17 people from various software companies met in the mountains of Utah.
Purpose: Need for an alternative to documentation driven, heavyweight software development processes convened.

We are uncovering better ways of developing software by doing it and helping others do it. Through this work we have come to value:

Principles behind the Agile Software Manifesto

More details: http://agilemanifesto.org/
Thanks to Chris Curnow for pointing this one out.